During my PMP exam preparations, I was a bit confused between a histogram and a Pareto chart. A Pareto Chart is just an advanced type of histogram. I will try to discuss all the concepts in an easy manner – Stay tuned!

If you are a history guy then you need to know that Kaoru Ishikawa – professor at Tokyo University, was the first who emphasized these QC tools.

Pareto Principle was developed by Vilfredo Pareto, an Italian economist, and sociologist who performed a study in Italy in the early 1900s.

One day while working in his garden and observed that 80% of beans are being produced by 20% of bean plants.

So, a Pareto principle is basically talking about the unequal distributions in the universe.

The Pareto Charts helps to find major causes first and this way we only concentrate only on the major ones. So, you will get to know that the majority of the defects are occurred by a few causes.

How does the Pareto Charts help?

You will also see many occasional/seasonal problems that cause the effect occasionally. This is called rule as vital few over the trivial many.

How to Draw a Pareto Chart | Example

Before to go for a graph you need to be clear that the data can be arranged into categories and each category is important. Make sure to download the template here for better understanding Pareto Charts Excel Template

Step – 1. Collect raw data about the cause and effect (Problem)

Step – 2. Use checksheets and tally your data. This will help you to determine the units, like frequency, cost, time, etc.

Step – 3. Check also the period to use use the collected data like one year, one area or whole project or EPS, or even one week.

Step – 5. Put causes on horizontal the x-axis and frequencies on the y-axis

Step – 6. Make sure the bar with the highest number of frequencies should be at the extreme left on the chart.

Step – 7. Add cumulative counts and lines by adding each percentage and the right side has a maximum percentage of 100%. 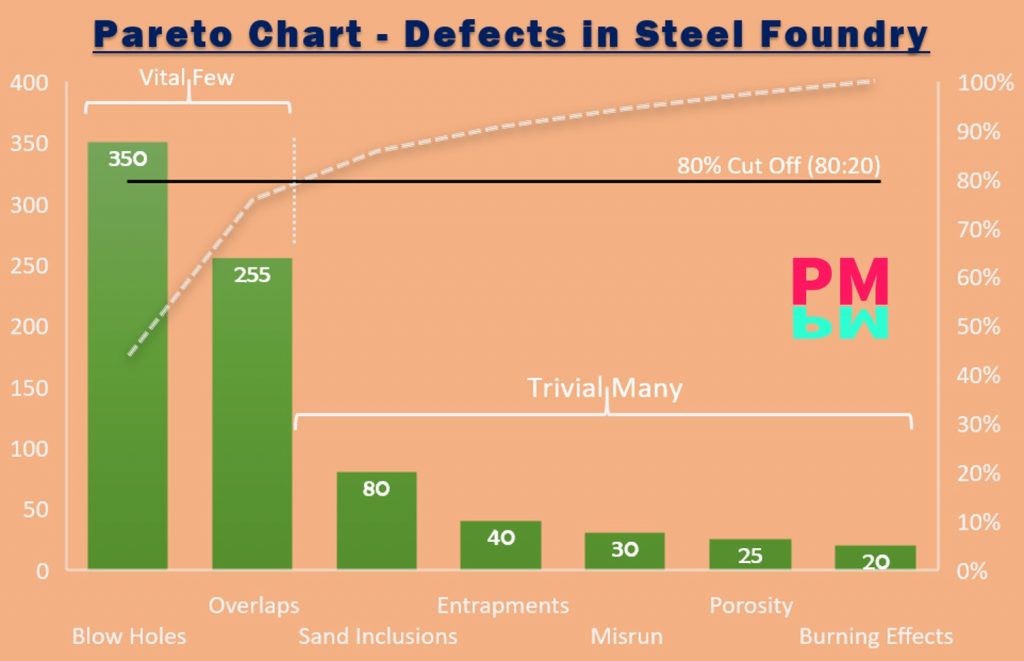 Example of a Pareto Chart

In the above example, you downloaded we got more than 1000 defective casting pieces. We started to segregate and used telly sheets to record the data.  Some defects were so in numbers that we did not consider. This is one of the major benefits of Pareto Charts that you can ignore the less frequent causes.

After we got Blow Holes, Overlaps, Sand Inclusions, Entrapments, Misrun, Porosity, Burning Effects in our telly with high frequency.

We put all in MS Excel in descending order like the most frequent on Blow Holes at the extreme right and so on.

We got a total of 770 defective pieces with repeated defects.

The Pareto chart is ready, and now you draw a cumulative sum line. The procedure to draw this line is as follows:

Calculate the percentage of each category to the total – 770. Then if you are using MS excel just drop-down or calculate one by one. Put these dots and connect. MS Excel will do all itself for you but you can make it manually if you prefer it.

Pareto charts have some limitations that’s why we need to choose any QC tool carefully before start implementing. Let see what are the major limitations;

Remember a Pareto is a type of histogram. In a histogram, there is no need to prioritize category and you will not find any cumulative curve. Here, you just draw as per data and then analyze the peaks and find the problem. A histogram is just a frequency distribution on each bar with time.

No doubt a Pareto chart analysis is a time-saving tool in Quality Management. As we have seen through the Pareto chart example that careful analysis can save tons of your time. This is the best tool when you are running out of time. Being a project manager, you can use this tool to perform delay analysis on your project to make quick decisions on project.